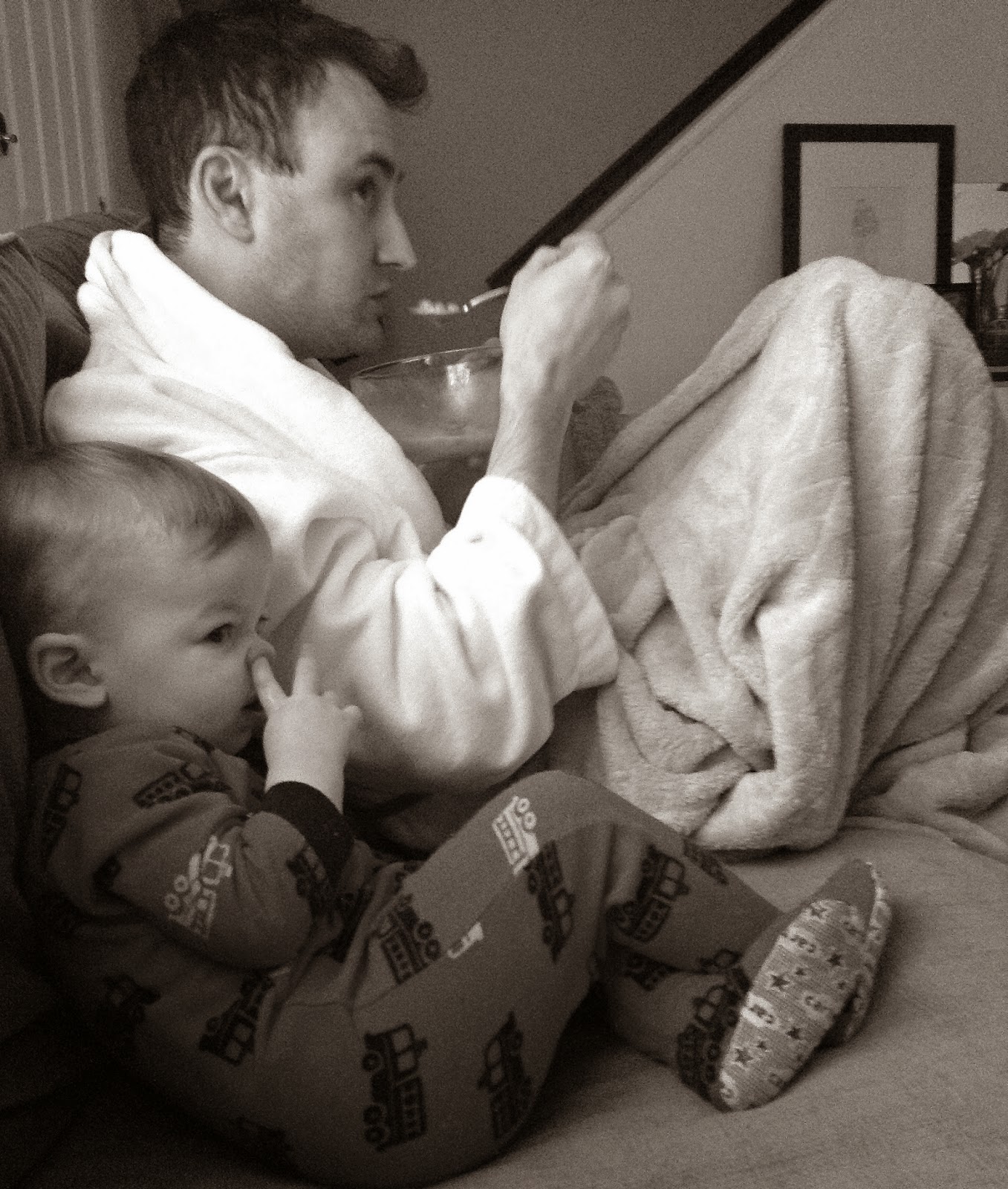 At 7:30am I wake up to a bed all by myself. Well, all by myself plus my squirming fetus child who only stops moving for the occasional contraction. I stretch out my legs only to get charley horses in both calves. I loudly hurumph myself awake. I roll my large body slowly to my feet and feel the frigid air that is Virginia's April morning. I waddle downstairs to find my smiling, pajama-ed toddler drinking his chocolate milk and squealing with a dramatic point across the room to me "dere she is!" I smile and kiss his head then tell the sleeping lump on the couch, also known as my darling husband, to get up and get in the shower. It takes me longer to find my inner-morning person these days.
The toddler demands to shower with his father every morning. Jared politely agrees even though I know it isn't what he prefers. As he tells it, August likes to sit on Jared's feet and stick his little fingers between Jared's toes. Jared has no inner-morning person to lure out in these sorts of situations. Yet, he manages to remain kind and gentle and even makes lion noises for August as he wraps him up in his lion towel.
August is then handed to me, wrapped up like a burrito. I kiss his nose until he starts squirming and whining which is instantly. This is the part of the morning that Gus requires many songs and distractions for getting dressed. I do my best to oblige him while also trying to speak fluent adult to my husband. I'm no pro.
Gus runs to the steps and after being told twice to "sit down turn around" he decides to listen to our advice and sits down, turns around, and scoots fast down the staircase. Jared and I trudge behind him. By this time of the morning, Jared is slowly waking up. I usually get a kiss.
Jared kisses me often and for many reasons. I'm certain this kiss is because coffee is mere minutes away and he knows it.
We clumsily rummage through the kitchen cabinets. August is sobbing at our feet and saying "this this" over and over pointing to the pantry where he knows we keep the gummies and the peanut butter. We don't do gummies and peanut butter in the morning. But he don't care. He asks just in case. No.
I'm tripping over my sad little toddler to throw a waffle in the toaster for him while trying to pour his milk into his sippy cup. My husband is racing around me to pour himself some cereal and prepare his coffee.
This is right around the time my fetus child decides to go ahead and start eating my insides. The hunger pangs only make me a more pleasant wife and mother, I'm sure. I hand Gus his waffle and his milk only to hear him melt down because waffles aren't peanut butter and gummies. I hold back my hangry just enough to not roll my eyes and eat his waffle. No, instead I reason as much as I can with him and add chocolate to his milk. He is fine with this and takes his sippy and waffle to the living room to watch PBS.
Jared's bus will be here in 10 minutes.
I make myself some oatmeal while trying to talk sweetly to my husband who I know will be gone soon and I'll miss until lunch. All I can think to say is, "you'll be home for lunch, right?"
Before any other conversation can happen, I promptly break a glass while trying to reach my pregnant body over the sink to make myself some chocolate milk. Jared stops what he is doing and cleans my mess while sternly instructing me to keep away. I sit down to eat my oatmeal and think to myself about all the glasses I have broken since we've been married. And the man has cleaned every single one. I remind myself that I have it good. He's good.
Jared checks the bus schedule and says he must go. He kisses me and kisses his son and he is out of the door. But not before he grabs a dirty diaper on his way out to throw it away.
Gus runs to the window and waves his hand 'bye bye'. He looks back at me sadly. I kiss him and try to convince him that I'll make his day fun. He cuddles me on the couch for the remainder of Curious George.  The baby goes crazy in my belly with kicks to my ribs. I want to poke her so she'll move but I don't. My arm starts to go numb from Gus leaning all of his weight on me. I start to move it, then I don't. I decide to stay put for however long I'm given. I enjoy the morning cuddles from my kids.

Our day has just begun.